Ghost Ranch is a place of magnificent natural beauty. It is comprised of deep, multicolored canyons and cliffs, plains, grasslands and streams. The Ranch is located on the far eastern end of the Colorado Plateau. Its colorful rock formations are a result of it escaping the infamous uplift of the Laramide Orogeny and subsequent erosion events. Its rocks span 130 million years of ancient geological history, representing lakes, floodplains, and deserts. Fossils illuminate the beginning of the age of the dinosaur in North America and provide a new paradigm of how they took over terrestrial ecosystems for the next 150 million years. Ghost Ranch’s archaeological record predates adobe walls and kivas; its hearths and other sites date back 6,000 BCE, or 8,000 years ago. 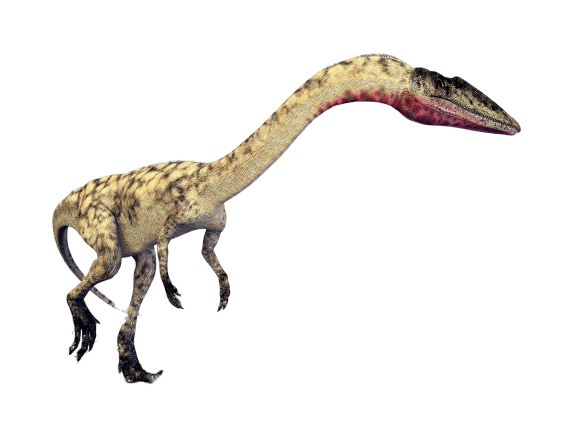 Dinosaur fossils from the Triassic period can be found in the dinosaur quarry on the way to the Kitchen Mesa trail. The colorfully dramatic landscape is sculpted from a stack of Mesozoic sedimentary rocks. This quarry has also generated some of the world’s largest collection of dinosaur fossils. Ghost Ranch is home to the world’s only complete Coelophysis, which is also New Mexico’s State fossil.

The first ancient people attracted to this area used the resources of the landscape left by ancestral sediments deposited 200 million years ago when the region was much closer to the equator. Later colonizers from other lands, including artists, adventurers, and entrepreneurs were attracted by the stunning beauty. Like Georgia O’Keeffe, they were at first unaware to the geological and paleontological contexts of the sediments and were simply amazed by the scenery.

How It Was Made

The “Cliffs of Shining Stone” (which are shiny because of their quartz composition) are of Jurassic age, and were laid down about 165 million years ago when a shallow sea covered the area. The fossil bearing hills and mounds of red and grey siltstone beneath the cliffs are earlier, from the Triassic Period, some 230 to 210 million years old. These deposits reflect older floodplains, lakes, and river systems that were inhabited by the first North American dinosaur and their relatives. Above the cliffs are younger deposits of Late Jurassic, Cretaceous and even Tertiary Age that represent a variety of environments. The geology of Ghost Ranch and its immediate area episodically spans over 170 million years of time, a very long record indeed.

Ghost Ranch and its environs feature a spectacular geological landscape of cliffs and escarpments. These date mainly from the Permian to the Cretaceous periods (some 170 million years), as well as some later formations and sediments. Portions of ancient river systems, vast deserts, saline lakes, broad mudflats, and ocean shorelines are preserved at Ghost Ranch. This makes it one of the most diverse representations of ancient times and environments of any property of comparable size in the world. It has created a majestic isolated piece of the Colorado Plateau’s geological layer cake, creating heavenly stretches of cliffs, canyons and mesas.

This beautiful landscape has escaped the treacherous faulting along the Rio Grande Rift in the east. Even though erosional activities have worked their wonders to create the ranch landscape. The Colorado Plateau, which occupies parts of New Mexico, Arizona, Utah, and Colorado, has been a relatively stable block in the Earth’s crust for at least 600 million years. Consequently the rocks in the area are generally flat lying and are only mildly deformed by broad scale folding.

The youngest units exposed around Ghost Ranch are Quaternary terrace and pediment gravels along the drainages, and extensive landslide and colluvial deposits along the escarpment. These represent the erosion of more ancient rocks, the incorporation of organic and other particles, and the redeposition of these materials as the remains of yearly floods and rains, or the flood deposits of local streams.

The mesas around Ghost Ranch are capped by Cretaceous coastal plain, shoreline and marine units that were deposited along the western margin of the Western Interior Seaway~93 to 125 million years ago. Approximately 25 million years of Earth’s history is missing across the contact between the Late Jurassic Morrison Formation and the Early Cretaceous Burro Canyon Formation. These rocks are pinkish green and were also formed by rivers and lakes at the beginning of the Cretaceous Period. Rocks from the later Cretaceous, such as the Dakota Formation and the Mancos Shale, as well as rocks from the Early Tertiary (after the age of dinosaurs), are known from the vicinity of Ghost Ranch but do not outcrop on the ranch itself.

Above the badlands that comprise the floors of the canyons and washes at Ghost Ranch tower the “Shining Cliffs.” These spectacular cliffs are made of Jurassic age rocks. The oldest of the Middle Jurassic rocks, the Entrada Sandstone, forms the prominent red, yellow and white cliffs just above Ghost Ranch. These deposits are part of a vast dune field that covered much of northern New Mexico and the Colorado Plateau for tens of millions of years after the end of the Triassic Period.

The Todilto Formation, which consists of a basal limestone and shale unit (Luciano Mesa member) and, in places, 25 to 100 feet of gypsum (Tonque Arroyo member), was deposited atop the Entrada Sandstone. The contact between the Entrada and the Luciano Mesa, The Todilto, reflects the incursion of shallow seas into the area (limestone and shale), and their later retreat (represented by the gypsum evaporites).

The sea, an extension of the Pacific Ocean, is not thought to have quite reached New Mexico, but salt waters seeping through the desert formed a large saline lake that later dried out. The Todilto Formation caps the Shining Cliffs; its greyish color forms a sharp contrast to the yellow green rocks of the underlying Entrada Sandstone. The contact between the Entrada Sandstone and the Luciano Mesa limestone member of the Todilto Formation is relatively flat and quite sharp, this may have been due to the hypothesis that the Entrada dune field experienced a catastrophic flood event, where the sand dunes were almost left untouched.

The Todilto Formation was most likely deposited in a salina, which is a body of saline water that is moderately deep to and is oxygen starved. This salina feature would have been isolated from the main body of the ancient Jurassic ocean, hence why they various layers are visually individually stratified.

The Todilto Formation grades up into the Summerville Formation, another Middle Jurassic deposit of variegated sandstones, siltstones, and mudstones representing ancient rivers and lakes. The base of 25 to 40 feet of the Summerville Formation is tabular white to tan sandstone interbedded with green to red mudstone and traces of shale. These and higher deposits sit atop the Shining Cliffs and are recessed from them, retreating with slopes that are less vertical but still very steep. The Brushy Basin member of the Late Jurassic Morrison Formation, the only member of the Morrison Formation present at Ghost Ranch, is made of pistachio green to salmon pink mudstone with a few interbedded tan and green sandstone beds.

The oldest exposed rock formation at the ranch is from the Upper Triassic Chinle group, which can be traced back to the Chama Basin. These rocks which are brick red to grayish-green in color consist of sediments from six different rock units. The sediments from this layer were deposited by rivers around 205 to 228 million years ago, this was when the tectonic plates under the Ghost Ranch area were situated at about 10 degrees north of the equator.

The Shinarump Formation is the white to yellow to green coarse grained sediment that is mainly quartz sandstone. This formation also contains well-rounded quartzite cobbles and is topped by the Salitral Formation. The Salitral Formation is exposed on the south side of the Ranch, which is along the Rio Chama tributary. The Upper Triassic Chinle formation can be seen on all the hiking trails on the Ranch. The mudstone Painted Desert which can be accessed through our trail rides, is Petrified Desert Member of the Petrified Forest Formation.
To learn more about the Painted Desert click here

The uppermost unit of the chinle layer is a thinly bedded red-brown to gray brown siltstone to sandstone. This interval holds the skeletons of renowned New Mexico state fossil Coelophysis bauri.

There are a few left. Click here to Order Your 2023 Calendar Today!