When possible, an advanced purchase of a Day Pass is preferred to visit Ghost Ranch and the Museums. This helps you get to having fun right away rather than having to wait in line at the Trading Post.  Please click here to purchase.

The Day Pass fee of $10.00 per adult grants guests access to both Museums, the labyrinth, and all Ghost Ranch hiking trails. Children 17 and under are free. Please check-in at the Welcome Center before visiting the Museums. At this time, mask use indoors is optional. Please refrain from visiting if you have any flu symptoms.

It is not hard to imagine dinosaurs walking along the edges of the buttes overlooking Ghost Ranch. From the corner of your eye, it feels like you’ve caught a glimpse of the shadow of the long neck and tail of these creatures. Especially after visiting the Museum, it’s more tempting to stop and study the rocks along the edges of the trails. A visit to the Ruth Hall Museum of Paleontology brings it all to life. Paleontology at Ghost Ranch

The Ruth Hall Museum focuses on the fossils and the environment of the late Triassic Period between 230 and 200 million years ago at the “dawn of the age of dinosaurs”.  All of the specimens on display at the Ruth Hall Museum were collected from three well-known fossil quarries. The Canjilon Quarry was discovered in the 1920s on U.S. Forestry Service land adjacent to Ghost Ranch. This quarry has produced some of the best skeletons of both the armored herbivorous aetosaurs and also skeletons of phytosaurs, the giant crocodile-like predators of the Triassic swamps.

The Coelophysis Quarry (or Whitaker Quarry) was discovered in 1947 on the Ghost Ranch property. A unique assemblage of several hundred skeletons of the dinosaur Coelophysis (SEE-low-FY-sis) in addition to other Triassic vertebrates have been found here. This quarry is a National Natural Landmark as designated by the National Park Foundation. Visitors can hike to this site during a visit to Ghost Ranch. Simply follow the Kitchen Mesa Trail on the Ghost Ranch map provided at the Welcome Center.

The third locality, the Hayden Quarry, was discovered during a seminar class at Ghost Ranch in 2002. This quarry has produced more than twenty species of land vertebrates along with charcoalized fossil wood from wildfires that occurred in the Triassic forest. The fossils discovered include Dromomeron and Tawa Hallae (ta-wa-hay-lee), two of the first recognized dinosaurs from North America.

Ongoing fieldwork at the Hayden Quarry has revealed new discoveries. In December 2020, an article was published in the international journal ‘Nature’ featuring a new discovery from Ghost Ranch. This study provides insights into the origin of pterosaurs (flying reptiles that occupied the skies for ~150 million year ago). The scientists, Dr. Martin Ezcurra from Museo Argentino de Ciencias Naturales, and Dr. Sterling Nesbitt from Virginia Tech, concluded that pterosaurs are most closely related to a group of animals called lagerpetids, including this newly-discovered taxon Ixalerpeton, (whose name means “leaping reptile”).

What You Will See: A twelve-ton block of mudstone, one of the many blocks removed from the Coelophysis Quarry, is currently undergoing preparation as the centerpiece of the Ruth Hall Museum. Museum visitors may interact with the paleontologists as they meticulously remove the rock that has encased the bones for over 200 million years. A new discovery from this preparation of this block is the first complete skeleton of swimming reptile called Vancleavea. Both a cast of this unique skeleton and a life-size model are on exhibit.

Also on display is an artist’s rendition of a small herbivore called Effigia okeeffeae, this archosaur’s name means “O’Keeffe’s Ghost”. There are casts and genuine bones of the famous Coelophysis, the state fossil of New Mexico. This early dinosaur was first discovered at Ghost Ranch in 1881.

School Outreach
Annually, approximately 2,000-3,000 school children visit the anthropology and paleontology museum on field trips and have the opportunity to learn about local cultures by participating in related educational activities such as traditional tinwork, sand painting, and straw-inlay work, as well as having the chance to hike to archaeological sites found on Ghost Ranch.

Thanks to AMNH.org  Shelf Life is a collection for curious minds—opening doors, pulling out drawers and taking the lids off some of the incredible, rarely-seen items in the American Museum of Natural History. 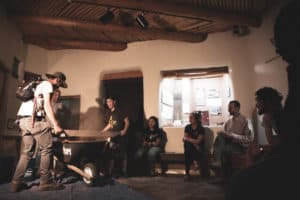 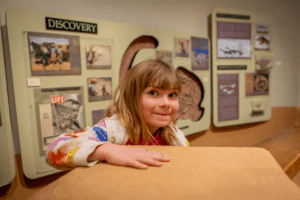 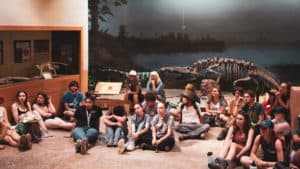