Occasionally, Ghost Ranch sends an email on behalf of a partner. This email is sent in partnership with artist Lydia Bauman and Mall Galleries London as they help share the Ghost Ranch story across the pond. Like Miss O’Keeffe, and many of us, Ms. Bauman has found inspiration and a strong connection with Ghost Ranch.

Two women artists at different points in history, living on different continents, pitching themselves against the same dramatic and magniﬁcent wilderness of New Mexico with only their own particular techniques as tools.
The legendary Georgia O’Keeffe (1887-1986) needs no introduction.
Lydia Bauman most likely does. She is both a landscape painter and an art historian fascinated by the phenomenon of this iconic American artist and her idiosyncratic interpretations of the landscape of New Mexico. She too has been a painter of wilderness for many years. She interprets it in a complex mixed media technique mixing pigments into plaster; using resin to trap sand, grit and mica; melting beeswax and experimenting with rusting solutions, patinas, texture gels, embossing powders, glazes, varnishes and mediums. By these methods, Lydia creates textured surfaces strongly evocative of the look and feel of the landscapes she observes around the world.
“In late 2016 I stood amongst her iconic paintings of New Mexico desert at the exhibition “Georgia O’Keeffe” in London’s Tate Modern and I asked myself, to what extent did her paintings represent the true character of that landscape? It was perhaps inevitable for me to eventually travel to the country Georgia O’Keeffe called “my backyard” to check it out for myself.
What would it be like to ﬁnd myself in a landscape so thoroughly appropriated by another, much-celebrated artist?
What did O’Keeffe respond to, what did she leave out?
How would our different methods serve the character of the land?
How important is it to know a place well in order to paint it well?
Fired up by these questions and after months of preparation, I ﬁnally realized my ambition in September 2017 when I packed a pair of sturdy shoes, a hat, a sketchbook and a camera and set off to New Mexico in search of Georgia.
It was immensely moving and inspiring to follow in the footsteps of the great American painter. I learned a lot by looking at and sketching the very locations where she lived, walked and painted and directly comparing them to her paintings.
I began to feel that rather than embracing the grandeur and visceral physicality of the desert, O’Keeffe preferred an abstracted design of smooth simplified shapes and colors, painted in oils on modestly sized canvases – the only scale possible for plein air painting with a Ford car as a mobile studio. I was surprised to discover just how much she edited and cropped her viewpoints and compressed space. I concluded that she must have been influenced by certain photographic effects observed in the work of Stieglitz with whom she had worked closely in New York and during their summers at Lake George early on in their relationship. I realised that no amount of familiarity and love for a place which O’Keeffe undoubtedly felt, could have helped her to evoke its spirit in the face of the overwhelming modernist tendency for flattened form and abstracted design which was sweeping across Europe and America in the early 20th century.
While my understanding and admiration of O’Keeffe’s contribution to American Modernism deepened, my own short relationship with New Mexico desert, free from the pull of artistic inﬂuences, allowed me a more direct and personal response to what turned out to be the most challenging and dramatic landscape I have ever painted. The task I have set myself was to re-interpret the self-same identiﬁable landscape motifs which once inspired Georgia, adding pronounced texture, modeling in light and shade, scale and new viewpoints essential to the representation of a land which overpowers, humbles, assails all the senses. In the process of exploring the limitless vistas of New Mexico, I am taking my own painting practice to its limits – resorting to a bigger scale and unusual formats such as diptychs and greatly expanding the range of my techniques.” 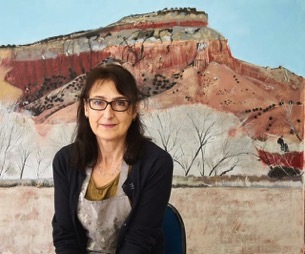 LYDIA BAUMAN is a Polish-born artist and art historian based in London. Having trained in Fine Art at the University of Newcastle upon Tyne and in Art History at the Courtauld Institute of Art, she divides her time between studio practice and lecturing in art history at the National Gallery and around the UK and abroad. Her mixed media landscapes have been the subject of over 30 solo exhibitions in the UK, USA, Saudi Arabia, Morocco and Poland and are in collections worldwide including Saatchi & Saatchi, Warner Bros, United Airlines, Deutsche Bank, State Street Bank, Linklaters, The Dorchester and Gordon Ramsey. www.lydiabauman.com @lydiabauman
Lydia Bauman: Red Hill, Ghost Ranch, New Mexico 2018 120cmx140cm mixed media with silver leaf on canvas

Festival of the Arts, Week 1

Be Well at Ghost Ranch

Exclusive offers and News delivered right to your email Box.

Refer your friends and loved ones to Ghost Ranch and let them experience the transformative spirit of this amazing place.
Sign Up for Enews